Here are the new features on Windows 11 that have been confirmed by Microsoft.

When is Windows 11 available?

Microsoft says it expects to start shipping new Windows 11 PCs this fall. Users who are using Windows 10 will also be able to upgrade to Windows 11 for free at the same time. However, not everyone will be offered the update immediately, a process that will last from the end of this year to 2022.

Upgrading to Windows 11 will also be optional, meaning Windows 10 users will still be able to use Windows 10 until it is discontinued in 2025.

Windows 11 is like a revamped version, changing from the startup sound to new application icons. Microsoft says Windows 11 is much faster than its predecessors.

Improved “wake” feature, Windows updates are up to 40% smaller and happen in the background, browsers will also be faster on this new operating system.

Microsoft says this will be the most secure version of Windows.

Here are all the new features of Windows 11.

Windows 11 comes with a whole new Start Menu and taskbar experience, as you can see in the screenshot below. Live tiles have been replaced with icons, similar to Android and iOS. You can still move the Start Menu to the left and choose an accent color to customize the look and function of the operating system. Microsoft introduced AI-powered widgets that bring the news, weather forecasts, and content you love right to your screen. The widget icon will be in the taskbar, you just need to click to see the information.

Microsoft Store was rebuilt from the ground up to improve speed, bringing a new app store for Windows 11 and Windows 10. Users will find it easier to discover and install their favorite apps, games, movies, and more.

The streaming tab now integrates more streaming services, allowing you to cast content from your device to your TV.

The list of apps is also expanding, allowing for Win 32 apps, PWA, UWP and more. Developers can also use their own engine and will keep 100% of the revenue (if any).

Several desktop apps, including Adobe Creative Cloud, Microsoft Teams, TikTok, Notepad, and Paint will be available in the Store.

The most interesting announcement is that Windows 11 supports Android apps.

Using Intel technology, Windows 11 will let you use Android apps on your computer. They are available in the Microsoft Store through the Amazon App Store.

Android apps will stay in the taskbar like other apps, and you can easily drag the app window around the screen. Microsoft redesigned the Windows Clipboard panel, adding GIFs and emojis to apps. Instead of searching for GIFs/emoticons online, you can press Win+V to launch the Clipboard manager and select/search for documents via the search bar in the menu, as shown in the image below on.

Windows Clipboard also has a new feature called “paste as plain text”. As you know, Windows 10 currently retains the formatting of the text content when it is copied from a web page or mail. If you paste the content into another application like Word, you will see the formatting is skewed.

In Windows 11, users can open the clipboard menu (Win + V) and paste the content as plain text, removing all unwanted formatting.

Finally, Microsoft also redesigned the virtual keyboard on Windows. You can now switch between multiple keyboard layouts. When not docking, Windows allows you to switch to a small keyboard layout for more flexible operation.

In addition, the virtual keyboard has an area right above it so you can move the keyboard more easily. In addition, Microsoft has refreshed the layout as well as created a new settings menu to improve the clarity of important tools. Since Windows 8, the virtual keyboard has been an important part of the operating system, but it has never received additional customization options.

Therefore, Windows 11 will help users have a better virtual keyboard experience, including support for virtual keyboard wallpapers. In C:\Windows\Web\touchkeyboard you will find eight new keyboard backgrounds with dark and light modes.

Users can find the keyboard color and size in Windows Settings.

Windows 11 can handle both mouse, keyboard and touch well. When using touch mode, the icons on the taskbar automatically expand, creating more space for easier touch.

There is a touch keyboard that looks like a keyboard on a mobile phone. You can swipe your finger to enter characters, using the spacebar as a trackpad.

You can enter voice input if you are lazy to type. This feature has been greatly improved, can automatically break sentences and accept voice commands.

By default, the taskbar has a Task View button to help users see all the applications and programs running on the desktop.

With Windows 11, users can rename, rearrange and customize the background for each virtual desktop. For example, you can use one virtual desktop for work and another for personal, like streaming. You are allowed to create as many virtual desktops as you want.

Microsoft introduced new Windows 11 multitasking features, including a cleverly designed multitasking layout that lets you quickly switch to the part of the window you need.

Windows 11 will remember where you put your windows so you can quickly find and switch to them. This Task view button is located right next to the widget on the taskbar.

If you use a laptop and desktop at the same time, when you switch to a laptop, Windows will remember the position of the windows and immediately return them to the correct position for you. This feature will also work when you use multiple monitors, and reconnect to a previously used monitor.

Task Manager is a tool to analyze the performance of web browsers like Edge and Chrome. Right now, when you open Task Manager and Microsoft Edge or any other browser is running in the background, you will see a long list of “Edge” processes with the same name.

Currently, it is not possible to identify the tab that consumes the most resources using Task Manager. Therefore, it is likely that the user will close the entire browser at the end of the process of a certain tab or extension. Windows 11 gives Microsoft Edge a big advantage over other browsers, as these “processes” are now streamlined in the Task Manager.

Each tab and other processes will be named and organized into different categories so you can see which browser features are taking up the most resources.

Windows 11 comes with a new “Eco Mode” for Task Manager to give users better control over running processes. In the new Task Manager, you can right-click an application and select “Eco mode” to stop resource-hungry processes, helping to save the most energy.

When an application is paused using Eco mode, other applications receive the priority of system resources. This can reduce CPU usage, improve overall system performance, and provide better thermal performance.

To enable Eco mode for any process, perform the following steps:

Microsoft introduced improvements to subtitle settings in Windows 11. You can find the new permissions by choosing Settings -> Ease of Access -> Hearing -> Captions.

Besides, you also find the new webcam settings by going to Settings -> Devices -> Camera. New settings allow you to configure the webcam connected to the device, include an external camera and integrate with your laptop/desktop.

From there, you can adjust the webcam’s brightness and contrast to improve image quality. Previously, it was only possible to customize the webcam through third-party applications because Windows did not have this feature. When you use the webcam for Skype applications, Microsoft Teams…a notification appears in the notification area.

Windows will only show one endpoint on the taskbar and it will automatically switch to the correct endpoint in the default way. This ensures you have a seamless experience when switching between apps like Spotify and Microsoft Teams.

Microsoft also introduced support for the AAC codec, which allows for good audio streaming quality in Bluetooth headphones like AirPods.

As you may already know, some devices use CABC technology to improve battery performance, however, it reduces image quality. In fact, it also leads to changes in brightness and affects the standardization of colors. Currently, you can disable CABC in display settings via Settings -> System -> Display.

In the “Advanced display settings” page, Microsoft introduces a new HDR certificate to guide users about HDR displays. On this page, the HDR certifications on your monitor will be displayed. Initially, this feature only works with some Dolby Vision and VESA DisplayHDR models, so you may not see HDR certification after the update.

The default layout of the classic File Explorer has been updated with a new spacing section to improve the virtual desktop experience. If you prefer the older layout, Microsoft added a new option “Use compact mode”, which you can access from Folder View Options.

When you enable this, it restores the classic layout and removes excess spacing. Since tablet mode has been removed, the UX for the existing interface is being updated to make it easier to work with files/folders when using the virtual desktop.

In addition, Microsoft introduces a new title for File Explorer, as shown in the screenshot below. 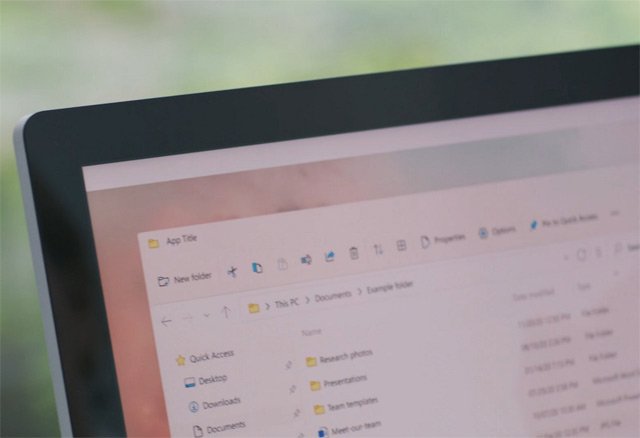 Windows 11 can now monitor the storage health of NVMe SSDs and notify users when data is at risk. This feature can be found in the Settings app.

If the drive has a problem, you will be prompted with a backup and restore message.

Optimize Drives tool is getting better and better

With Windows 11, some old features like “Optimize Drive” received minor improvements. For example, a new “Advanced View” checkbox will show your hidden volumes. Another new checkbox “Current status” will show more details when the volume is not available for defragmentation.

New emoji designed to support Emoji 12.1 and 13.0. Microsoft has added over 200 new glyphs. As part of the Windows update, the operating system now features a sexist emoji design.

Existing emojis are also getting visual changes to improve consistency across Microsoft products. 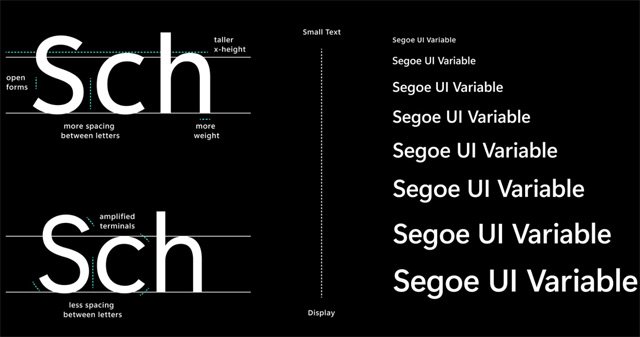 Bloatware has been removed

Windows 11 will also remove unnecessary apps and bloatware. For example, 3D Viewer and Paint 3D will no longer be pre-installed on Windows. If you want, you can find these apps in the Store.

Microsoft has also removed the Math Input Panel due to few people using it. However, you can still use it by downloading and installing “Math Recognizer” via Settings -> Apps -> Apps & features.

Some apps are updated via Store Applications

Such as MS Paint, Windows Notepad, and the Snipping Tool can now be updated through the Microsoft Store. These apps are now updateable outside of major Windows updates. Microsoft also refreshed the app’s icons. Likewise, Paint has been “advertised” and occupies its own place in the Start Menu, outside of the Windows Accessories folder.

The Windows update retains the legacy slicing tool, which can now be updated through the Microsoft Store.

The new “Windows Tool” will open in File Explorer with links to advanced applications, such as PowerShell and Windows Accessories. Basically, the administrative tools and the Organizing system are in the Windows Tools folder. You can access the village through this directory.

Of course, you can still find PowerShell in Windows Search. Microsoft also created a separate place for File Explorer in the Start menu.