In addition to an almost complete change in the user interface compared to Windows 7, Windows 10 also received a lot of improvements in features, performance and stability of the whole system during use and working. our users’ work.

But that’s on computers with mid-range configurations and using SSD hard drives, and for the rest, specifically low-profile computers, using HHD hard drives, Windows 10 is really a nightmare

Old computers using Windows 7 operating system when upgrading to Windows 10, the performance will be significantly reduced, often crashing, freezing and Full disk 100% during use. This situation even occurs even when just booting into the system.

The causes of this problem are many, but the most popular and known to you is probably the Superfetch service.

So what is Superfetch? and why does it cause lag and crashes for older computers using Windows 10 operating system?

That question is also the content that I want to share with you today. Well, in this article we will take a closer look at the Superfetch process on the Windows operating system.

What is the Superfetch process on Windows?

Superfetch actually appeared a long time ago, I remember correctly, from the Windows Vista version, but it wasn’t until the Windows 10 version that it was noticed…

Simply because it is one of the causes of 100% Full Disk error for computers using traditional HDD.

According to Microsoft, Superfetch has the effect of maintaining and improving the performance of the system over time, so it is difficult to see its true performance in practice.

Instead, we often have the habit of turning off this service completely right after installing Windows 10.

Since the update version of Windows 10 version 1803 onwards, perhaps this process is turned off by users too much, so Superfetch has been renamed by Microsoft to Sysmain so that users can not find Superfetch but turn it off

Through multiple analysis, those applications will be classified as “frequently used” and prioritized to preload data into RAM to improve performance.

From then on, every time you start these applications, it will load a lot faster because all the necessary data is already pre-loaded into RAM, but how fast RAM is, you know 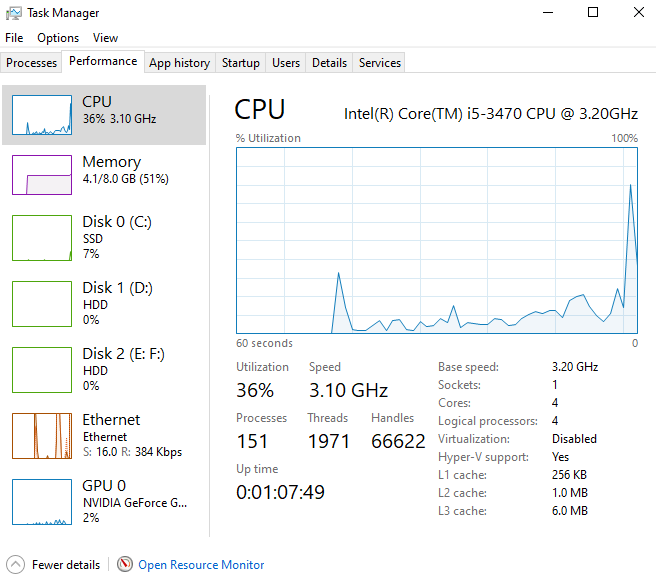 By default, Superfetch will tend to take up all the free memory that Windows has not used to store application data.

But as soon as the system needs it, for example to load other applications’ data, all the RAM that Superfetch is occupying will be freed by it immediately if needed.

On Windows there is also a feature similar to Superfetch called Prefetch and can be considered Superfetch as a successor of Prefetch.

The difference is that Prefetch does not perform analysis of usage data over time and adjusts data preload parameters appropriately.

Most of us will turn off the Superfetch service because it is the main cause of the extremely annoying Full Disk error for computers using HDD hard drives. But in fact, Superfetch is really very useful for the operation of Windows 10.

And as you can see in the picture above, if you have a computer with a mid-range or low-end configuration like me, and have an SSD hard drive, Superfetch works so smoothly that you It doesn’t even recognize its existence.

In its normal state, it uses only 1.1 MB of RAM and barely touches other system resources such as CPU, hard drive, network and GPU. 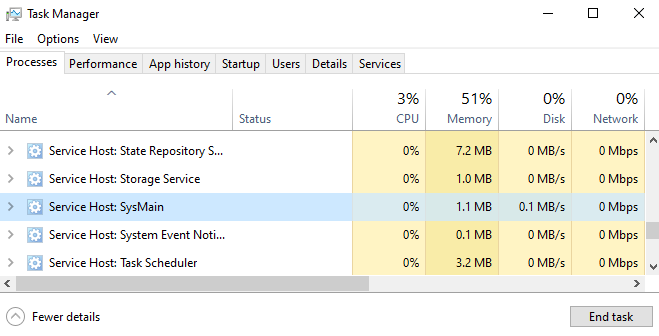 However, there are still a few problems that you will encounter when Superfetch is enabled on Windows 10:

In addition, Superfetch can also cause lag when we play games, especially with computers with only 4GB or less.

The reason has not been found so far as not all of them experience this phenomenon, but this condition is related to “RAM consuming” games because these games constantly require more RAM causing translation. The Superfetch service has to load and then release data from RAM continuously and continuously.

So in short, Superfetch is so useful, is it okay to turn it off? Any influence? The answer is: No, there will be no effect on your Windows 10 if Superfetch is disabled.

In case the computer works smoothly and does not have the problems that I mentioned above, leave it as it is, there is no need to turn off Superfetch, guys.

If you still regularly experience 100% Full Disk status, taking up a lot of RAM and overall performance is reduced when running RAM-intensive tasks, turning off Superfetch will help to fix it somewhat. Otherwise, re-enable this service on Windows 10.

8 reasons why you should upgrade to Windows 11

How to use the new “Quick Settings” menu on Windows 11

How to return to Windows 10 Start menu on Windows 11